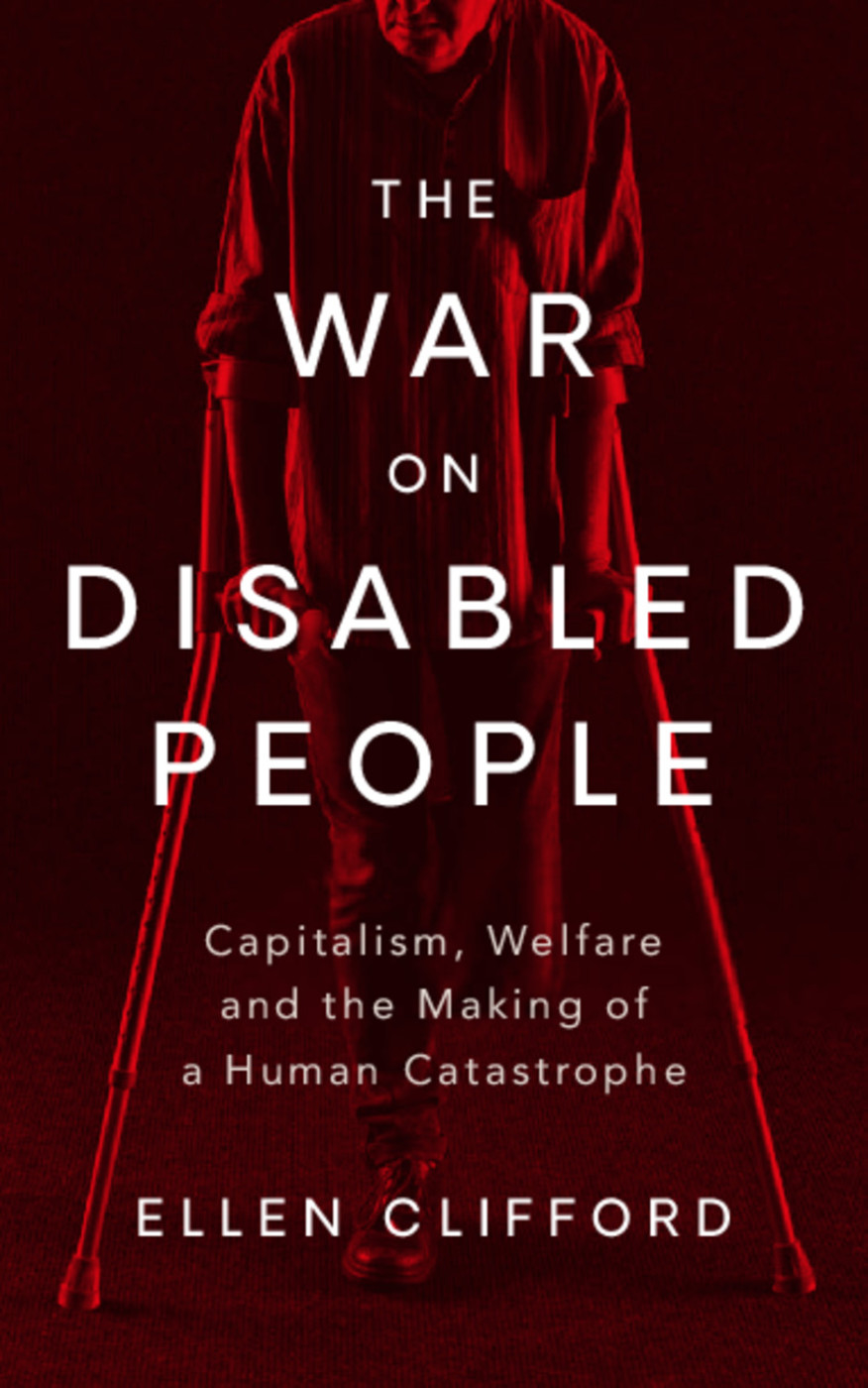 Punitive welfare regimes and the removal of support for disabled people under successive Labour and Conservative governments have resulted in a situation described by the UN as a ‘human catastrophe’. Dara O Cogaidhin reviews Ellen’s Clifford’s forensic account of the cold cruelty of the war on disabled people.

In 2016 the United Nations published an excoriating report that found austerity policies, including cuts to disability benefits and social budgets, amounted to “systemic violations” of the rights of disabled people. It concluded that government ministers pushed ahead with changes even when they knew they would have an adverse impact on disabled people. Portrayed as lazy and a burden on tax payers, the report noted that disabled people continued to face “increasing hostility, aggressive behaviour and sometimes attacks on their personal integrity”.

Ellen Clifford, in The War on Disabled People: Capitalism, Welfare and the Making of a Human Catastrophe, tells the story of an unreported Britain. Betrayed by politicians and left stranded by the dismantling of the welfare state, she documents how disabled people have been disproportionally and relentlessly targeted by successive Tory-led governments. She vividly describes how austerity was a deliberate political choice that is “producing a re-segregation of disabled people”.

Clifford’s searing analysis owes much to the foundational work of the disabled academic Michael Oliver. Having rooted disabled people’s exclusion and poverty in the political economy of capitalism, he developed the social model of disability to challenge long-held theories based in seeing “disabled people portrayed as objects of pity without their own agency”. This model instead builds from the proposition that is structural and systemic barriers which impede disabled people rather than the impairments themselves.

For disabled people – who, culturally, are routinely perceived as “helpless” – it is important to recognise that every gain was fought for. In the early seventies, disabled people began to self-organise to challenge their oppression. Organisations such as the Union of the Physically Impaired Against Segregation (UPIAS) fought a campaign for civil rights and independent living; the right to live and participate in the community with the same opportunities as non-disabled people.

In the nineties, the Direct Action Network (DAN) – “the enforcement arm of the Disabled People’s Movement (DPM)” – fought against plans by the newly elected New Labour government to cut disability welfare payments. In one action that attracted international media attention, activists reached the door of Number 10 on Downing Street and threw red paint over it. The government were shamed into quietly dropping their plans.

The brutal plans for punitive welfare reform would emerge again with plans under New Labour to get a million people off benefits and into work. A fixation on disabled people as “benefit scroungers” prepared the conditions for later Tory governments to enflame “hostility against disabled people as an integral element within their strategy for pushing through welfare cuts”.

Although her greatest ire is saved for the Tories, Clifford is also scathing of Labour in opposition during the coalition years. She outlines how the then Shadow Secretary of State for Work and Pensions, Liam Byrne, stated that Labour would make cuts to the welfare budget if elected in 2015. Using language aligned with Tory rhetoric demonising benefit claimants, Byrne was quoted as saying, “Many people on the door step at the last election felt that too often we were for shirkers not workers”.

Clifford laments how large sections of the DPM have been “co-opted to create the illusion of progress”. Principles that started in the DPM such as ‘Nothing About Us Without Us’ are now commonly mainstreamed within health policy. Many leaders of the movement took jobs within government and accepted peerages. She is derisive of corporatised charities that purport to represent disabled people, but have lost sight of their traditional value-base and avoid overt criticism of the government in favour of opportunities to work in partnership. Some have even colluded with the government in their workfare schemes. She states: “On a wider level, they operate as part of a civil society that upholds and strengthens the capitalist system”.

The past decade has seen a return to grassroots activism: “Just as welfare reform has been a defining policy of Tory rule since 2010, so the rise of disabled people’s resistance has been a key feature within the anti-austerity movement”. Disabled People Against Cuts (DPAC) was formed in 2010 to reclaim the social model of disability, to link into the broader anti-austerity movement and to provide a basis for collective action. Garnering headlines for their daring direct actions, such as the storming of Parliament in 2015 to protest the closure of the Independent Living Fund, DPAC’s lobbying efforts also triggered the unprecedented inquiry by the UN that is detailed above.

Clifford is deeply influenced by class politics and has continued the work of Oliver in laying the historical materialist theory of disablement. She explains how the “brutality and conceit of capitalism” is apparent in the idea that disabled people are people of lesser worth. Politically conscious disabled people have been making this connection for almost a century, with famed activist Helen Keller writing that “idleness is fundamentally caused by conditions which press heavily upon all working people”.

Clifford argues that “full liberation from oppression for disabled people cannot be achieved under a system that puts people before profit”. Disabled people’s inability to fit within the norms of capitalist society should be an impetus to build a new society organised on the principle of ‘from each according to their ability, to each according to their needs’. Critical of the “little attention from socialists, union activists and academics” towards disabled people’s struggles, she insists that disabled activists require some level of self-organisation alongside building a “new, diverse anti-capitalist movement”.

If ever there was an issue that deserved to have the much-abused ‘urgent’ appended to it, this is it. The pandemic has only served to widen pre-existing inequalities. Accessible to academics and non-academics alike, The War on Disabled People surveys the increasing abandonment and demonisation of disabled people in Britain today, but will inspire the reader to amplify disabled activists’ voices in the resistance against austerity and capitalism.