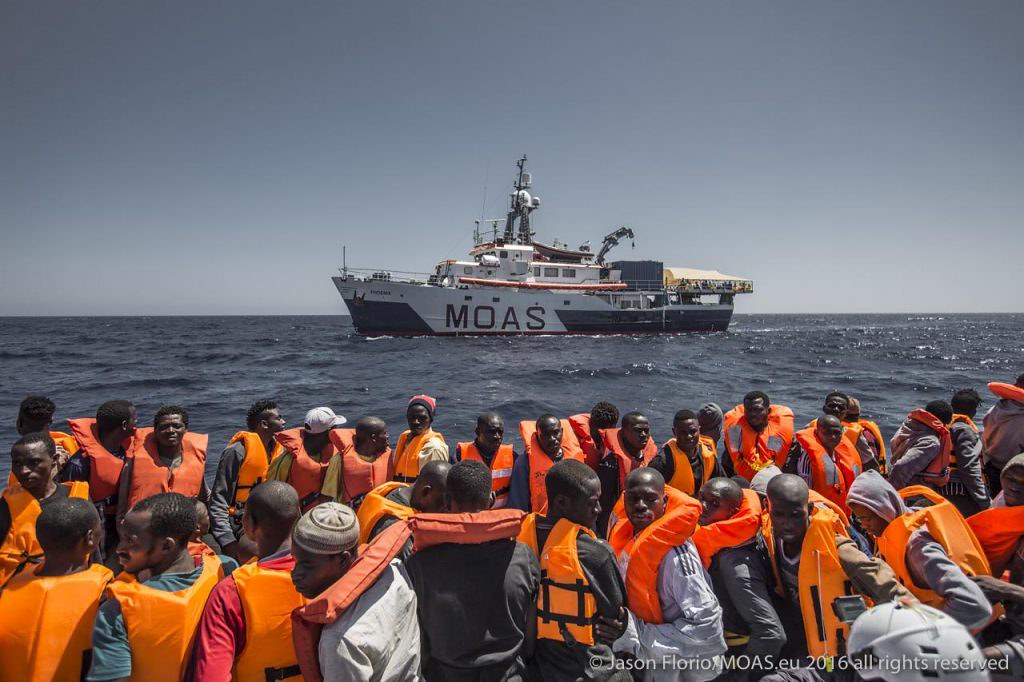 Over the last decade, migration has become an urgent political issue. Migration from the global south to the north is intimately connected to the legacy of colonialism, but the 2010s has seen a particularly higher number of people fleeing chronic poverty, political instability, wars and climate change in countries often laid to ruin by western-backed institutions.

Tens of thousands died at sea and in refrigerated trucks trying to reach safety in Europe. Instead they found themselves a “problem” to be blamed for society’s ills. Throughout this time, Britain imagined itself to be a victim of a migrant or refugee “crisis”. In 2015 researchers from Cardiff University’s journalism school found that British press coverage on refugees was more hostile and polarised than in newspapers across the rest of Europe.

Newspapers like the Daily Mail and the Daily Express incited fears of migrants and refugees, telling their readers that they were being treated to more homes, more jobs and more generous benefits than the British-born population. The apex of this media narrative was during the Brexit referendum campaign. A YouGov poll weeks before the referendum found that 56% of respondents thought “immigration and asylum” were the most important issues facing Britain.

There was a 41% surge in hate crimes in Essex between July and September of 2016 in the aftermath of the Brexit vote. The UN’s Committee on the Elimination of Racial Discrimination stated it was deeply concerned that the referendum campaign was marked by divisive, anti-immigrant and xenophobic rhetoric. The committee did not name any politicians but the referendum campaign threw up allegations of racism against Nigel Farage and UKIP, whose anti-migrant “Breaking Point” poster was reported to the police for inciting racial hatred.

Former UKIP MEP and councillor Tim Aker made the absurd and laughable claim that refugees caused long grass in Thurrock when he criticised the EU for giving money to refugees. During the referendum campaign, Thurrock UKIP also sought to rachet up tensions with their malicious and provocative “We want our country back” posters.

The inference in this slogan was clear: it suggested that immigration was undermining ‘the British way of life’. The poster also exploited the anxieties and insecurities of people they claimed to represent: the ‘ordinary, decent people’ of post-industrial Britain who had experienced decades of New Labour and Tory neglect and economic decline. The late sociologist Stuart Hall decried the role of the media and politicians in “hiding and mystifying the deeper causes” of genuine, but far more nuanced, social problems.

The national media coverage on migration has been more muted since the pro-Brexit vote has been achieved. However anti-migrant headlines have recently appeared in one local media outlet. On February 4th the Thurrock Nub News claimed the Home Office “dumped unsupported refugees in Chadwell St. Mary”. The article cites concerns raised by residents and Labour councillors that refugees had been placed in Thurrock Council properties, a claim refuted by the Cabinet for Housing who clarified the Home Office had housed them in privately rented properties.

Accompanying the article was a photoshopped image depicting a long queue of youthful-looking Asian men with packed rucksacks snaking towards the Chadwell St. Mary Centre. It immediately evoked UKIP’s “Breaking Point” poster and its crystallisation of the fabled Farage “swarm”. It should be noted the editor of Thurrock Nub News, Neil Speight, was a former UKIP candidate in the 2016 Thurrock Council elections.

It soon became evident who the Labour source for the story was. On April 13th, Thurrock Nub News readily published anecdotal evidence from Labour councillor Gerard Rice about “the behavior of the refugees who have been in privately rented new houses on Oak Grove by the Home Office”. Cllr. Rice claimed that the anti-social behaviour in Oak Grove has been ongoing since January – even though a Labour source had previously claimed they were living in council properties on Claudian Way.

If there have been incidences of anti-social behaviour in Oak Grove, Cllr. Rice should use his position as a community leader to liaise between the refugees and the wider community. If living conditions are not compliant with standards, then that is not fair to both the refugees needing support and to the host communities. The refugees should have also been appointed a caseworker to support them and inform them about their rights and entitlements, but also to advocate on their behalf when they are denied them.

Integration is a two-way process. But nowhere in the article does Cllr. Rice show concern to and sympathy with the refugees and the poor conditions they are forced to accept. Cllr. Rice found it more expedient to scapegoat the refugees rather than demand support from the Home Office and Thurrock Council to facilitate successful community integration. His comments carry a subtext that the refugees are the problem.

And what about the voices of the refugees themselves? They are ignored in Thurrock Nub News’ trial by media. Neil Speight, creating sensationalised and stereotyped images of migrants, has imagined Chadwell St. Mary to be on the verge of “breaking point”, exploiting not only these cruelly misrepresented refugees, but the climate of suspicion and distrust that are a feature of communities that have been hit hard by the loss of traditional industries and the rise of the low-paid gig economy.

It is little surprise that research has shown that the absence of migrant voices in the media can have negative consequences for migrant integration and their personal wellbeing and security. If their collective voice could be heard, local communities in Thurrock could learn about their hopes for a safer future and the cultural, social and economic contributions they want to make to life in the UK.

Thurrock Labour must always be prepared to challenge the scapegoating of migrants and refugees. Hostility to them is not some organic expression of English identity, but the outcome of decades inflammatory media distortion and political opportunism. By focusing on “welfare tourism”, the need to limit migrants’ access to social housing and emphasising migrant crime, the government has deflected criticism of its austerity measures and decimation of public services.

A powerful new video titled ‘You Clap for Me Now’ has highlighted the crucial role immigrant workers are playing in keeping Britain running during the COVID-19 crisis. Hundreds of foreign-born doctors, including refugees, have responded to a NHS call to tackle the pandemic and signed up to become medical support workers. RefuAid said about 100 refugees have signed up for the support role.

We need a conception of the working class that doesn’t pitch people against each other along the lines of deserving/ undeserving, white/BME, British/migrants: such divides have justified policies that make all groups worse off. Thurrock Labour should promote the working class tradition of solidarity and the socialist value of internationalism.