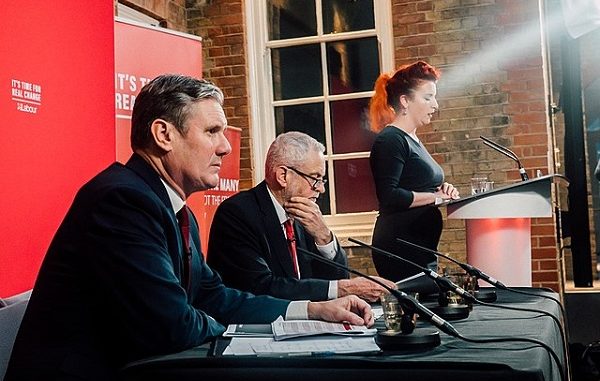 Mick Hall argues Jeremy Corbyn’s suspension is the result of a sustained smear campaign by the Labour Right and a notoriously hostile press. From the beginning, it has been a war on the Left.

I will not waste time going over the EHRC report. It was a stitch up from the beginning and nothing will change this.  We should not overlook the fact that this organisation is a government quango i.e. who pays the piper calls the tune.

What the ruling classes did to Jeremy Corbyn, they have done many times before, when they see a threat to their power and privileges.

With all the mainstream media outfits in their bag, plus the right-wing and hard centre of the Labour Party, they knew, given people’s gullibility, if they smeared him long enough, folk would come to believe their lies. Tony Benn, Arthur Scargill, and A J Cook* were smeared in a not dissimilar way.

I have had personal experience of being smeared and it is excruciating. The way Jeremy has dealt with this shows what a tenacious and courageous man he is.

After the 2017 General election result, which bode well for Corbyn Labour, the ruling classes and their toadies realised this was not just an internal Labour Party spat. Jeremy was a real threat to their interests and they concocted a conspiracy to bring him down.

Since then, hardly a day has gone by without a section of the mainstream media reporting negatively about him.  Now, after Starmer suspended him they are trying to nail down his coffin, and destroy his legacy, which no matter what the mainstream media may claim is considerable.

Sadly, it has been reported on the day the EHRC report was published, there were left-wing MPs briefing journalists, claiming Jeremy should have kept quiet and not defend himself in such a vigorous way.  If this is true, they would be wise to read Martin Niemoller’s poem ‘Then They Came’. Jeremy is not the first high profile left-winger to be suspended from the LP and he will not be the last.

Everyone who considers themselves a socialist, whether they are Labour Party members or not, should support the campaign to have Corbyn’s suspension lifted.  There can be no if’s and but’s about this!


* The press hated AJ Cook, the miners’ leader, ever since he was first elected. Now, in the full flow of the lock-out, they brought out all the tricks of the trade to damage him. Their tactic was familiar to us. By use of demonology – the study of the devil – they sought to detach the miners’ leader from the miners. All Cook’s qualities were described as characteristics of the devil. His passionate oratory became demagogy; his unswerving principles became fanaticism; his short, stooping stature became the deformity of some gnome or imp. In particular, Cook’s independence of mind and thought was turned into its opposite . He was the tool of others, the plaything of a foreign power – for Cook himself had provided his tormentors with the identity of his ‘controllers’.