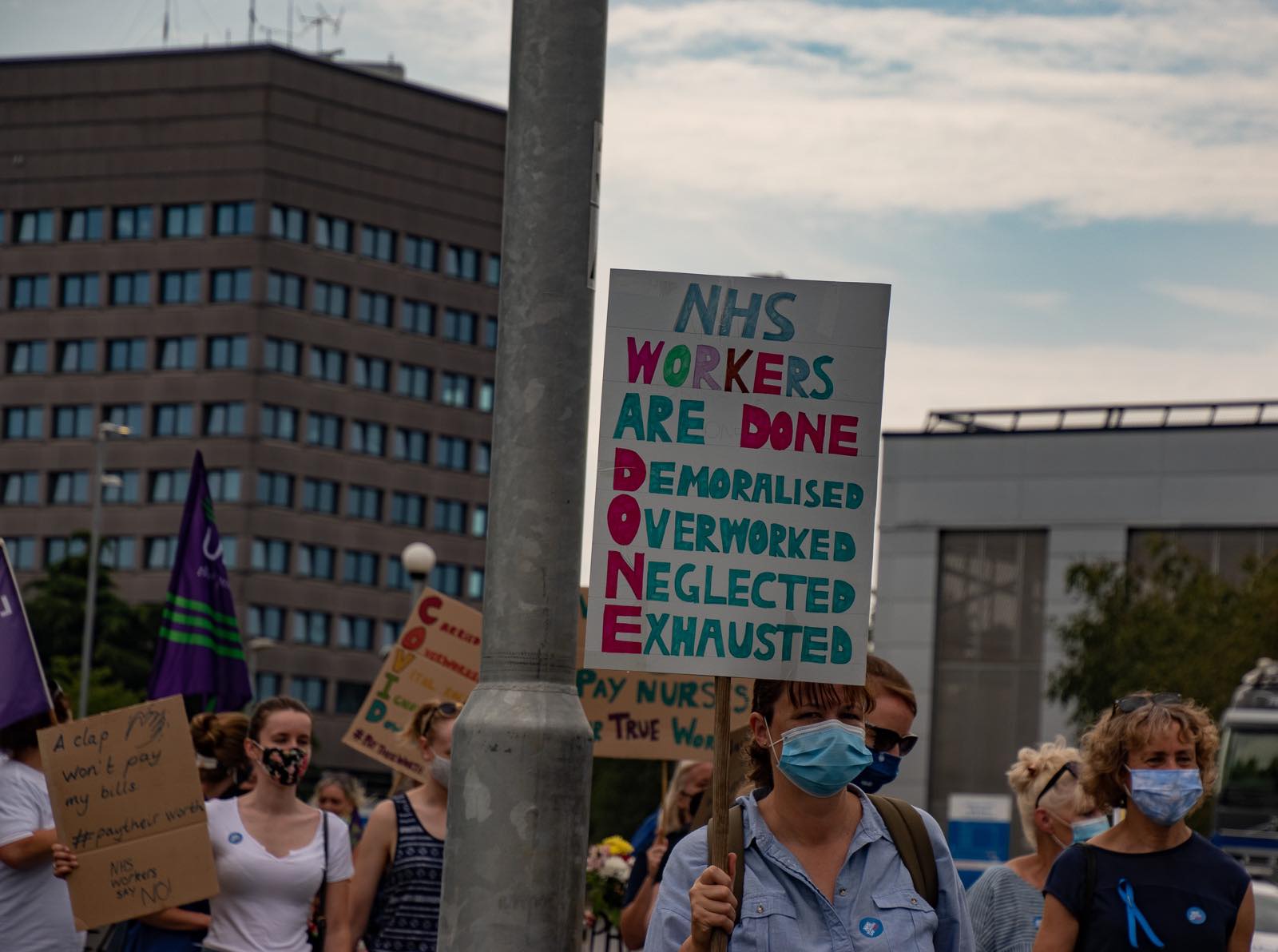 Hundreds of protesters converged at Basildon Hospital to march for fair pay for NHS staff and recognition of their efforts during the coronavirus pandemic. The Essex-wide mobilisation was one of many across the UK as NHS workers took to the streets to vent their anger at being excluded from a recent public sector pay rise.

Crowds gathered at the entrance of Basildon Hospital at 11 am and were addressed by nurses who provided impassioned and powerful accounts of the pressures facing health workers on the frontline. A two-minute silence was held at 12 pm for the 500 NHS and social care workers who have died during the pandemic, providing a stark reminder of how health workers put their lives on the line by treating infected patients without the necessary protection.

Protesters then marched to Basildon town centre chanting “Hey hey, ho ho, this pay freeze has got to go”. The majority of drivers honked their horns in support underlining the huge public support for health workers and their demand for a 15% pay rise. A blue banner reading ‘Essex NHS Workers Say No to Public Sector Pay Inequality’ led the march.

The march in Basildon was sparked by a grassroots movement launched on social media by frontline health workers. For some of the organisers, it was their very first protest, but the enormous success of the event belied their inexperience. With leadership desperately lacking from the RCN and Unison, their rank-and-file members have taken the initiative in building a national network of organisers who plan to keep the momentum going in their areas.

The scale of support for yesterday’s march demonstrated the level of frustration on the frontline over pay. The government’s decision to exclude nurses from the public sector pay rise is a slap in the face to people who for many weeks were applauded on the streets as heroes. The fulsome praise of the Tories turned out to be sickening hypocrisy.

The government’s pathetic excuse is that nurses are already getting a 4.4% pay rise this year. However, this ignores the fact that nurses have lost 20% of their pay in real terms, contributing to a growing nursing shortage which puts patients at risk. The massive coronavirus bailouts for big business shows the government can afford it. A recent YouGov survey also revealed that a massive 77% of the public support a pay rise for nurses.

Rather than echo the public’s overwhelming support for a pay rise, the Labour leader Keir Starmer was mute on yesterday’s protests. By contrast, the former leader Jeremy Corbyn released a video expressing his support for the protests. The Labour Party should stand shoulder-to-shoulder with frontline NHS workers who are being slowly pushed into poverty.

The action by grassroots NHS workers can mobilise pressure and lead the way in winning pay justice for all. The organisers stress this is only the beginning and are planning to apply pressure on their unions to publicly call for a 15% pay rise. The TUC and the other unions should press their claims together as the first step in the fight to ensure our pay and conditions are not sacrificed to pay for the coronavirus crisis.