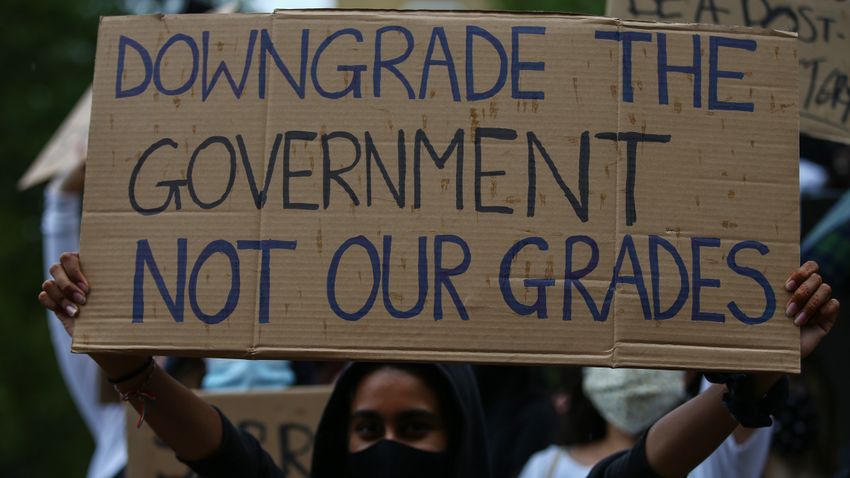 Following a weekend of localised protests and growing rancour online, the Education Secretary Gavin Williamson caved in on the exam results controversy in a humiliating U-turn to give students their teacher predicted grades for A-levels and GCSE results. While this undoubtedly represents a victory for young people, it will also provide scant succour for those students whose first-choice course has already been filled.

The Government and Ofqual faced intense pressure and scrutiny from students, parents and teachers following last week’s A-level results, when 39 per cent of teachers’ predictions were downgraded in England. The students who saw their results downgraded by the algorithm were from predominantly working-class backgrounds and attended state sector education.

Gavin Williamson’s immediate response to the backlash was to defend the grading algorithm as the “fairest possible way” to assess students. On Saturday he stubbornly declared there would be “no U-turn”. Students affected by the results debacle appeared on various media outlets to provide eloquent testimonies about how the discriminatory process robbed them of their future. Their message was clear, emotive, and human. This growing anger found expression on the streets as thousands of students mobilised in cities across the country to demand the restoration of teacher predicted grades.

On Saturday, students and teachers marched from Downing Street to the Department of Education (DfE). Along the route the protestors chanted “Justice for the working-class”. Young people had a clear understanding their futures laid in tatters because of class and race inequalities in the British education system. On Sunday, Tory MPs questioned Williamson’s “competence” and students staged a second day of protests outside the DfE. Sources from Ofqual conceded that their grading system had led to a “haemorrhaging of public trust”.

Under fire from all sides, the Government was forced into an embarrassing climbdown. Williamson immediately deflected blame on to Ofqual, claiming he had only discovered the potential unfairness in Ofqual’s algorithm for moderating grades “over the weekend”. In fact, details of the algorithm were published on Thursday and it is bizarre that an Education Secretary would not scrutinise the algorithm following the results fiasco in Scotland.

The DfE also lifted a cap on the it had imposed on the number of students universities can recruit. However, the number of places on a course in not finite and universities have warned students it will not be possible to honour all original offers. This has thrown university admissions into chaos. While the Russell Group universities may struggle to deal with additional demand, there are fears that disappointed students who accepted places at lower-tariff universities will now try to trade up. The higher education sector is already experiencing an acute crisis hastened by Covid-19, with the sector projected to lose around £2.5 billion in tuition fee income in the coming year. This could mean as many as 30,000 jobs cut in the sector.

While the Government’s U-turn means that students will see their results changed if their teacher’s prediction was higher, students whose moderated result was higher than their predicted grade will keep it. This ensures that private school students whose grades were massively inflated by the algorithm will retain their unfair advantage and awarded university place, even if it is at the expense of a student who initially received an offer but later had it withdrawn. The Government U-turn continues to protect university places awarded to students from wealthy backgrounds, thus smashing the Tory myth of meritocracy to smithereens.

The reality for most students is that hard work is not enough to overcome the systemic failures facing the working class. BTECs and other qualifications are not included in the Government’s latest decision. These students – disproportionately from working-class backgrounds – will feel the effects of downgraded results even more acutely, as one grade drop at BTEC is equivalent to two A-level grade drops in terms of UCAS points. This means they are potentially missing out on placements, offers and clearing, underlining how deeply classist the education system in Britain is today.

The class nature of education has never been more starkly demonstrated. However, the struggle for a free and fair education system will be revitalised by this recent student victory. The Government’s recent U-turns – on the NHS migrant surcharge, free school meals and now the A-levels results – show that even the Tories with their large majority can be forced to acquiesce to progressive demands. Confronted with a deepening social crisis, we cannot afford to wait four years in hope for a Labour government.

As the pandemic continues to be a fixture in our lives for the foreseeable future, we also need to urgently transition away from end-of-course exams to continuous assessment. Continuous assessment is recognised by most European countries as a tool for deeper learning, meaning they were largely able to avoid the exam meltdown that happened in the UK. We also need to argue for the integration of private schools into the state education system so that each school has a broad social class mix and that resources are shared equally.