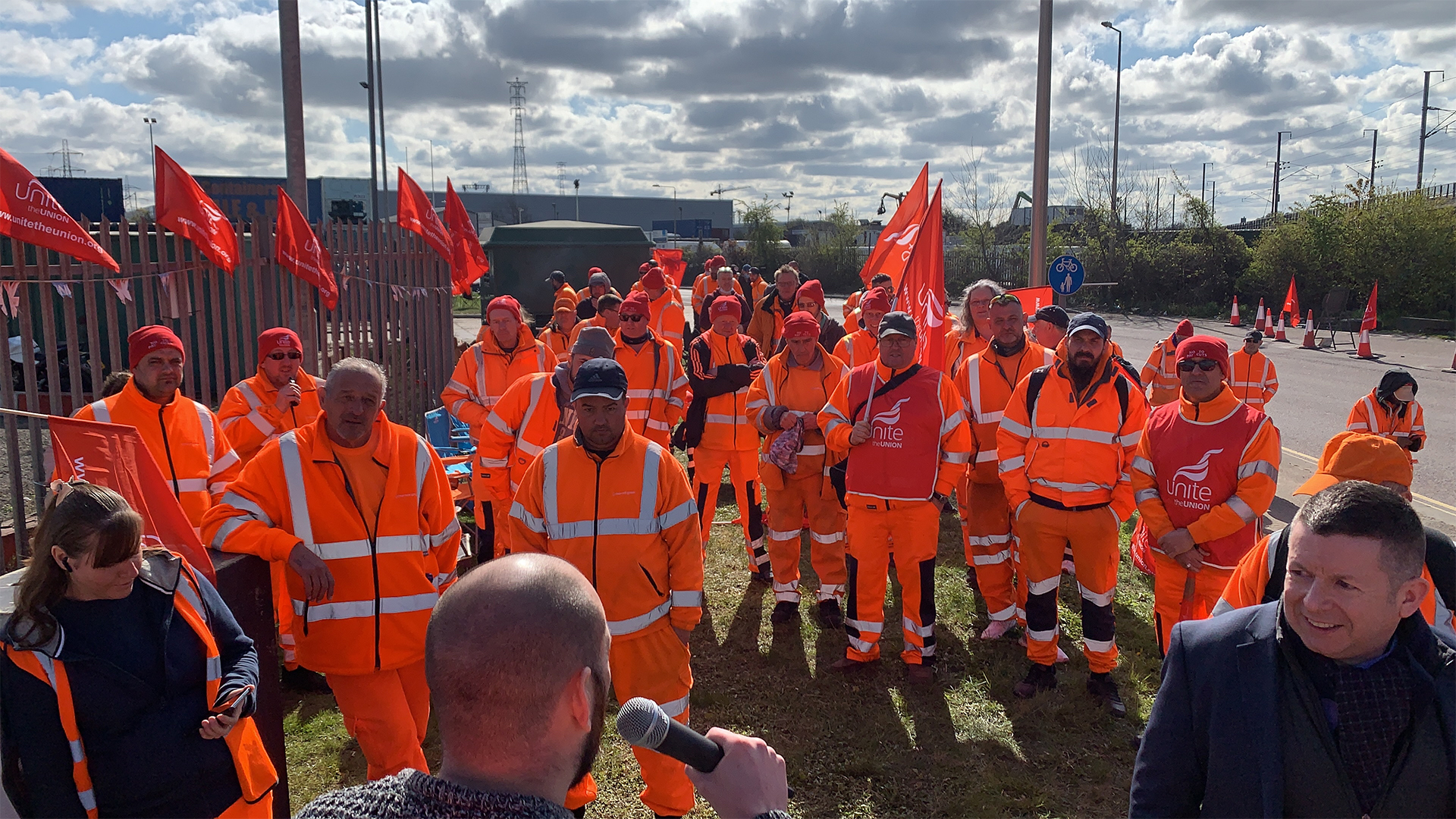 With the cost of living soaring and house prices spiralling in Thurrock, workers cannot afford a pay cut. Trevor Osborne argues we all have a stake in the bin strike and should support their fight against the race to the bottom.

We will be a week in to the bin strikes this coming Monday. At this point nobody will have noticed much of a change collection wise. The bin workers are working every day as normal until 9am, concentrating solely on Green/Grey bins as these are the most perishable. Recycling bins and garden waste will not be collected during this period of protest.

Few people on social media in the local area will be unaware of the strike by now though. Media coverage has been, by and large, has been supportive of the bin workers’ plight. From local news groups to the BBC, the strike has featured with many a hot debate on social media taking place.

On one side there are the bin workers, the public, and the local Independent and Labour councillors.

On the other side is a small cabal of Conservative councillors, several of them elected as independents but now sitting as Tories after floor crossing after their election.

The debate centres around the cuts proposed by the Conservative-controlled Thurrock council. These cuts are to the terms and conditions of employment that the bin men signed up for. These cuts also effect many others, from care workers to street cleaners, but for the purpose of the article we will stick to the bin workers.

Bin workers, the guys who collect the bin from your curb and take it to the dust cart, are facing a loss in annual earnings of over £1000 due to the proposed cuts. Guys and girls who last year earned £25k will earn £24k next year to put it in layman’s terms.

So I want to try and explain why this fight is important to us all, why it affects all Thurrock residents and why we should all be making our feelings known to the council and councillors that support these cuts.

I’m Thurrock born and bred. I have never lived outside of the borough; I grew up in Aveley and currently live in Purfleet. Thurrock is my borough and I’ve seen changes a plenty over the years, not all for the good.

My Dad worked as a forklift driver at Thames Board Mills for my entire childhood until the mill closed. My dad’s wage at TBM afforded him a mortgage on a 3 bed semi in Aveley to house himself and my Mum, myself and my 4 siblings.

Dad was a hard worker; he took on weekend work/overtime to make sure we had the best we could possibly afford such as a week in Walton-on-the-Naze as a treat. At the same time, I had a home life provided by my Mum. Mum worked part-time when the opportunity arose but with 5 kids, this was more in later life than when all were young and at home.

Fast forward to the present day: a fork lift driver, much like a bin loader, will be earning around the £25k mark.

This means a worker on bin man’s or fork lift wages of £25k would need a 12 x salary mortgage to buy a family home. At a push, you might find a lender willing to lend on 5x salary (£125k) but 12x salary is never going to happen.

The council are looking to reduce the bin men’s wages further, from £25k to £24k, making home ownership even more of a dream than a reality. We end up in this London centric cycle where the bin men are collecting waste from homes they could only ever dream of owning.

I want to examine the arguments put up by the council on social media:

1. The council wants to align with other councils nationally.

Bullshit! Housing and the cost of living in the south east is far higher than most other areas. The main reason we have regional borough councils is because each region faces different challenges. Aligning the wages of workers with those in say Hull (random example) means you have to align the cost of living also.

A quick google search finds 3 bed homes in Hull available for around £115 – a figure much more workable with a £25k salary. Sadly, Hull is not commutable to Thurrock.

I have 3 kids and they can’t get on the housing ladder in the area they were born while employed fulltime by any of the retailers at Lakeside.

We should, as a community and as a borough, be pushing for wage rises for all workers in line with the cost of living. The goal should be that anyone working 40 hours a week should be able to afford to live in the area they work, the area they grew up in, the area they know.

Thurrock Council aims to reduce the wages of people at the bottom of the ladder, to put them further away from the security of home ownership and to keep a divide between the working-class bin men, shop workers, carers, street cleaners and the London based home owners.

I thought about doing a point 3, to argue against the name calling and lies certain councillors deployed against our key workers, the bin workers, the shop workers and the carers – all of whom worked right through the pandemic. But frankly, I can’t stoop to that level.

The bin workers’ strike is about all of us and what we want the future to be. It’s about our kids, their ability to live and provide in the area they grew up in, to aspire, and to be in control.

The bin men have my support as my kin, my neighbours, my friends.