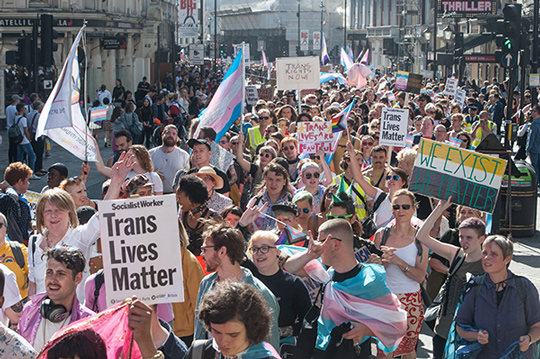 The recent spate of attacks on trans rights by Jackie Doyle-Price are part of a larger strategy by the Tories to stoke a culture war and provide a cover for countless policies that meaningfully worsen the material conditions of their working-class voters. Dara O Cogaidhin argues Thurrock Labour should speak up and extend their solidarity to the trans community.

Tory MP Jackie Doyle-Price has become embroiled in a transphobia row sparked by a tweet about the Olympic weightlifter Laurel Hubbard. Following congratulations from the soap manufacturer Dove to Hubbard for becoming the first openly trans athlete in the Olympics, Doyle-Price waded in and petulantly tweeted: “There will be no more Dove for me”.

This has become a consistent pattern of behaviour for Doyle-Price who has history making extremely homophobic and transphobic comments. She previously slammed the LGBT+ movement as “dangerous”, described the movement for trans rights as “regressive”, and even alleged to be a defender of lesbians though she voted against same-sex marriage in 2013.

Doyle-Price’s insidiously toxic remarks on the supposed idea that young people are being pressurised into medical changes is about marking gender variance as undesirable, even shameful. The anti-trans narratives of Doyle-Price, the Tories and their aligned media (e.g. Spectator, Times, Telegraph) is part of a new ‘culture war’ deflecting attention away from rising poverty, declining mobility and increasing cuts in public services.

Nowhere are these deteriorating living conditions more acutely felt than in Thurrock, where more than 11,000 children live in poverty and the unemployment rate has risen to 7%. The only coherent strategy for Doyle-Price – who has failed to deliver anything tangible for the borough – is to create a ‘moral panic’ about transgender youth now that the long, divisive battle over Brexit has finally been resolved.

Amid rising transphobic hate crimes, quadrupling over the past 5 years, the Tory government announced last year that it is ruling out proposed changes to the Gender Recognition Act (GRA) which would have made it easier for transgender people to have their gender legally recognised. The Tories ignored a 2018 public consultation in which, out of 102,818 responses, 64% said that the requirement of a diagnosis of gender dysphoria should be done away with.

As Amnesty, Liberty and Human Rights Watch responded in a joint statement, this was a “missed opportunity to ensure that the law kept pace with human rights standards”. This right to gender self-identification already exists in Ireland, Malta and Denmark. Instead, the Tories decided not to act upon the public consultation in order to shore up support with their reactionary base.

Thus far, no public representative of Thurrock Labour has responded to Doyle-Price’s repeated smears against the trans community and the LGBT+ movement. Unfortunately, it is becoming increasingly clear councillors have no intention of taking a public stand in defence of trans rights.

While it could be argued their silence is part of a broader strategy to win socially conservative, “left-behind” voters in Thurrock, that would be giving them too much credit. A cursory search of local media outlets has revealed not a single criticism – on any issue – of Doyle-Price since she was re-elected in 2019. This failure of opposition is a total abdication of political responsibility.

While Thurrock Labour refuses to hold Doyle-Price to account, school pupils at Harris Academy in Ockendon demonstrated no such hesitancy. They garnered newspaper headlines and widespread praise when they challenged her refusal to support Black Lives Matters during their school assembly. Unable to withstand the criticism of her gross misrepresentations of BLM, she was reportedly asked to leave the school.

As socialists, our core aim should be to fight for a society where everyone can live happily, safely and have their material needs met. The Labour Party and the entire trade union movement must organise to resist attacks on the trans community and live up to the principles of inclusion and solidarity. When a Labour MP like Rosie Duffield disregards the existence of transgender people by claiming “only women have a cervix”, there should be zero tolerance for her dangerous scapegoating. Not only is there no conflict between trans rights and women’s rights, but they are part of the same struggle against gender and sexual oppression which structure capitalist society.