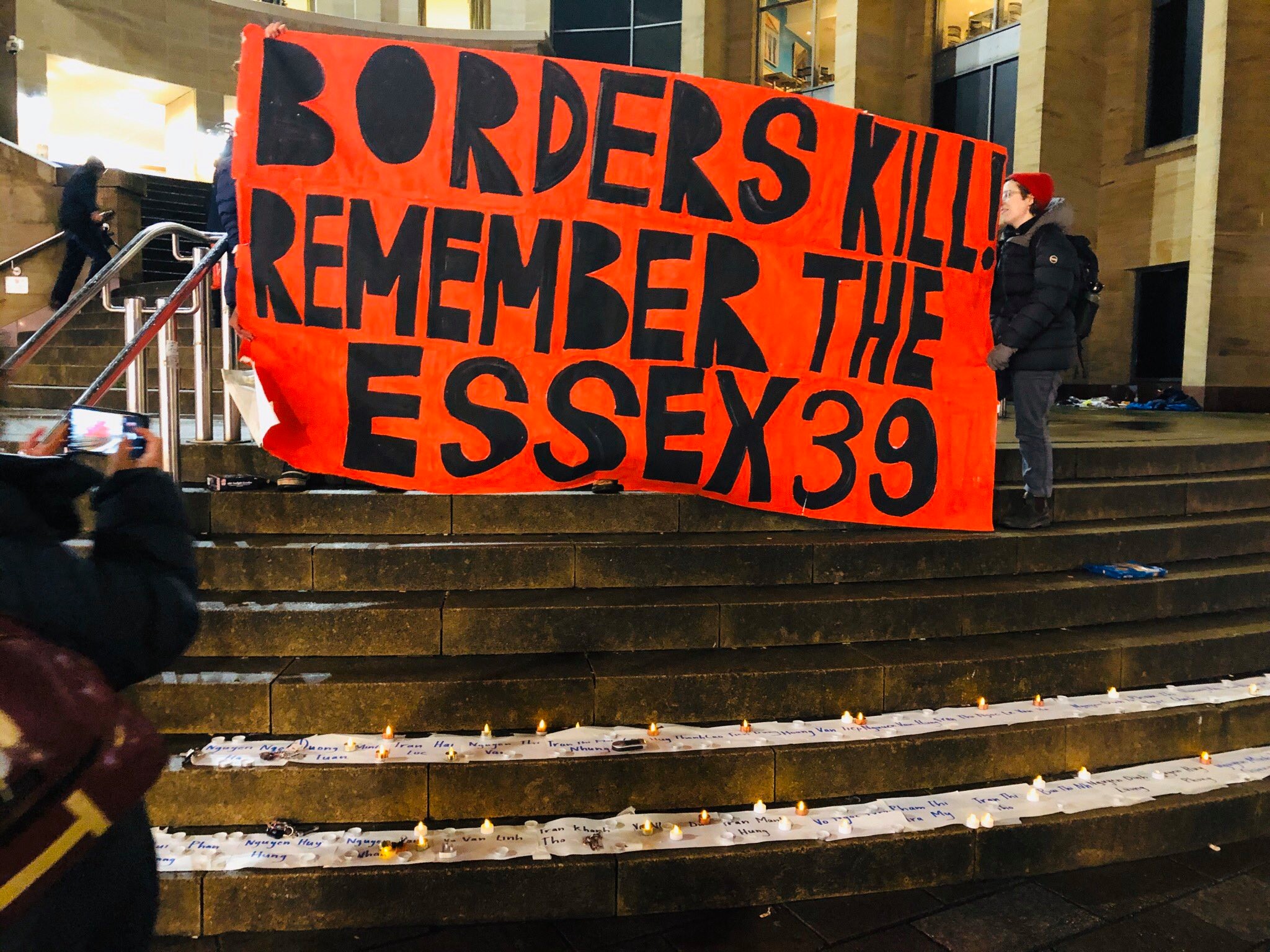 A year ago today, the bodies of 39 Vietnamese people —29 men, 2 boys, and 8 women—were found in the trailer of an refrigerator lorry in Thurrock. Victims of people smugglers, Dara O Cogaidhin argues the Tory government shares culpability as their anti-immigrant measures force refugees and migrants to resort to extremely dangerous methods of entry to the UK. This article was originally published on Red Flag in November 2019.

Authorities found 39 people dead in a refrigerated lorry in an industrial park in Thurrock, Essex on 23 October in one of Britain’s worst human-smuggling tragedies. The lorry had crossed by sea from Belgium, a route increasingly used by migrants after tightened restrictions on departures from Calais. The victims are believed to be from Vietnam. Families who fear their relatives are among the deceased have submitted DNA samples to the authorities.

The incident echoes several cases of attempted trafficking that have ended in tragedy across Britain and Europe. In 2000 the bodies of 58 people from China were found in a tomato truck at Dover. In 2015 Austrian police found 71 bodies – including those of eight children – also inside a truck.

As the lorry’s driver appeared in court charged with manslaughter and human trafficking, both Boris Johnson and the Home Secretary Priti Patel visited Thurrock Council to sign a book of condolences. Abdicating any responsibility for the deaths, Johnson had the temerity to write:

“We mourn those who lost their lives… In condemning the callousness of those responsible for this crime, we in the government of the United Kingdom resolve to do everything in our power to bring the perpetrators to justice.”

The 39 deaths are a fatal consequence of “Fortress Britain” and the government’s punitive deterrence regime, which is forcing migrants to resort to riskier methods of entry to the UK. Last month at Tory conference Patel declared she was proud to be part of a Brexit government that was “taking back control of our borders” and “ending the freedom of movement once and for all”.

The relentless rhetoric of “illegal” immigration has generated growing levels of racist discrimination and abuse in the wake of the Brexit referendum. Research by Opinium this year showed the proportion of people from an ethnic minority who said a stranger had targeted them rose from 64 per cent in 2016 to 76 per cent this year.

This climate has emboldened the Tory government to bolster UK borders and introduce new anti-migrant measures along the Channel, including £3.2 million for drones, radar, night goggles, number plate recognition and border patrol boats.

The 71 deaths in Austria in 2015 produced a mass outpouring of sympathy for refugees as thousands of ordinary people organised accommodation, food and clothing to meet the convoys of people arriving from the Middle East and North Africa. The response in Thurrock this time was ominously more muted: a small prayer service and a vigil; candles and flowers at the scene.

Thurrock Labour’s parliamentary candidate John Kent has remained silent on the tragedy. In a constituency where 72 per cent voted to Leave in the Brexit referendum, he calculated it was inexpedient to denounce the cruel immigration policies that caused the 39 deaths. Labour members must demand he speaks out.

In her response to the deaths, Diane Abbott called for safe and legal routes for “genuine” refugees to enter the UK, legitimising the “deserving” refugee and “undeserving” migrant narrative. On the Andrew Marr show she called for increased border security at smaller ports. This is both callous and stupid.

Smaller ports are increasingly used by people traffickers precisely to avoid tighter security at ports like Dover. Increasing security will simply encourage the use of more dangerous methods. The inevitable consequence of this opportunist concession to anti-migrant chauvinism is higher profit margins for traffickers and misery and death for migrants.

Instead socialists call for the abolition of border controls and fight for maintaining and extending freedom of movement. These deaths were avoidable. Blaming the smugglers does nothing but mask the structures of capitalism and racism that restrict movement, entrench exploitation and endanger lives.

Editor Note: The Labour Campaign for Free Movement organised the successful push to pass policy in support of open borders and equal rights for all migrants at the 2019 Annual Conference. We encourage our supporters to get involved.