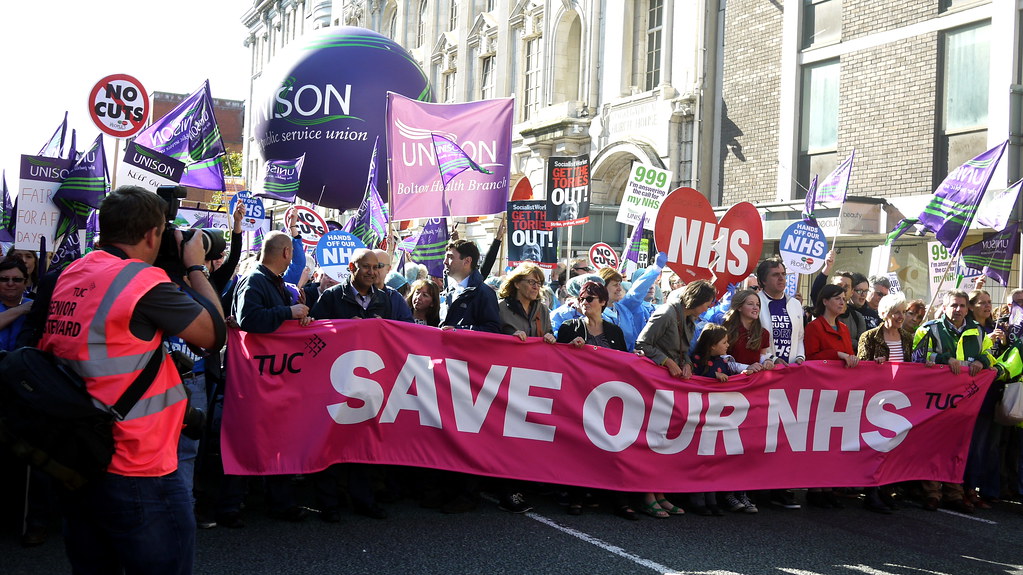 The NHS recently celebrated its birthday on July 5th. It is the pioneer of universal, publicly financed health, admired and in varying degrees imitated worldwide, and could probably be credited with much of the improvement in the health of the British population since its creation. Offering “cradle to the grave” medical treatment for all – free at the point of delivery – it is rightly regarded as Labour’s greatest achievement. Supported even by a majority of Tory voters over the years, ardent supporters of privatisation such as Margaret Thatcher were obliged to assure voters that “The NHS is safe in our hands!”

It was peculiar then, a week following the poignant and very public celebration of the NHS, that a leading Labour councillor would argue for the building of a private hospital in Thurrock. At a meeting of the Local Development Plan Task Force on July 13th, Gerard Rice jettisoned Labour policy to advocate for a private hospital to meet the needs of “some very well-off people in Thurrock”. He added that the to accommodate the future plan of 32,000 new houses, the NHS going forward will have to “depend on the private sector” (scroll to 47 min in the link). It is the latest in a series of ill-judged comments from Chadwell St. Mary’s idiosyncratic councillor.

In the 10 years since the publication of The Marmot Review, health inequalities are widening nationally and locally. In Thurrock the life expectancy is 8.4 years lower for men and 7.4 years lower for women in the most deprived areas than in the least deprived areas. There are also significant wealth disparities in Thurrock, with some areas of the borough among the 20% most deprived in England. More than 1 in 5 children in Thurrock are growing up in poverty (21.2%) higher than the national rate (20.1%). This figure rises to 56.4% in parts of Tilbury.

These health inequalities are exacerbated by the shortage of essential health services in the borough, leading the director of primary care to label Thurrock as one of the most “under-doctored boroughs in the country”. In 2018 the doctor to patient ratio in Thurrock was one GP to every 2,700, compared to 800 nationally. This can be attributed to three factors.

Firstly, the relentless growth of population in Thurrock is putting enormous stress on services that cannot cope with the pace of change. Despite this, applications for housing developments on green belt sites in densely populated areas continue to be approved at an alarming rate.

Secondly, the number of full-time GPs is falling. The number of GPs between 2015 and 2018 was reduced by 4% – the equivalent 1,180 fewer GPs. Chronic underfunding and increased workload has seen many GPs resign. Cuts to the number of district nurses and other community-level health services has driven people to seek more help from GPs. Rather than resolve the GP crisis, services are put out to tender, enabling private companies to profit from NHS money.

And thirdly, there are significantly fewer GPs per head in poorer areas of England than in richer areas. These inequalities are driven by funding formulas not doing enough to steer general practice money to the deprived areas that need it.

A decade of austerity including destructive cutbacks and rising need has brought the NHS to its knees, resulting in an erosion of quality and growing staff shortages. At the end of 2019, 43,000 nurse jobs in England were unfilled. The ill-conceived plans to close Orsett Hospital will make it much more difficult for Thurrock resident to access vital healthcare and will put added pressure on Basildon Hospital which has occasionally been put on black alert due to the strain on it’s A&E department.  Orsett Hospital underlined its value recently with the facility hosting haematology and rheumatology day units transferred from Basildon Hospital to ease the pressure there during the first Covid-19 wave.

Would a private hospital improve healthcare provision and quality in Thurrock? No.

One reason is that providing good healthcare to everyone in the community is arguably never going to profitable. When there is an absence of public subsidies, profits from healthcare will be made by cherry-picking the healthiest or wealthiest patients. The failure of Circle Heath trying to make a profit out of running a NHS hospital in Hinchingbrooke also demonstrated that a healthcare market would be more costly than an integrated health service.

Private hospitals also contribute nothing to out of hours or emergency care, or to treating trauma, strokes, heart attacks, psychoses and so on. Private hospitals do not offer emergency diagnostics or emergency in-patient treatment. They generally specialise in uncomplicated surgical procedures with short recovery periods – if things go awry, they will simply phone an ambulance and return them to the NHS. A 2017 study from the Journal of Public Health also showed that increased private provision of elective hip arthroplasty was associated with a decrease in NHS provision. The authors argued it may have contributed to an increase in age and socio-economic inequalities in treatment rates in Scotland.

The Covid-19 crisis has highlighted how the private healthcare sector is parasitic on the NHS. A recent report from the British Medical Association has revealed that the government has accelerated its outsourcing to private firms such as Capita and Serco. Rather than address the failure of austerity policies on the NHS and commit to rebuilding the health and social care system, the Tories have chosen to “throw huge amounts of money at scores of private firms – money lost to public services and frittered away forever”.

Far from filling gaps in NHS capacity, as Gerard Rice would have us believe, private healthcare is really aimed at taking work away from the NHS and putting the wealthy at the front of the queue. Thurrock Labour should be at the forefront of stopping the closure of Orsett Hospital – despite the fatalism of some of its leading councillors. Thurrock residents are overwhelmingly in favour of retaining the hospital and investing in its upgrade and future. There are also question marks around the viability of four Integrated Medical Centres that would replace Orsett Hospital because of “affordability issues”. This was a mobilising opportunity that was missed in the decisive general election defeat last year.

Despite the hypocritical clapping, the Tories are determined to use the pandemic to run the NHS into the ground and parcel off the profitable sections in any post-Brexit trade deal with the US. They want to exclude hundreds of thousands of health workers from the public sector pay rise and to privatise the NHS, re-erecting what Aneurin Bevan famously described the “money barrier which existed in orthodox capitalist society between the doctor and his patient.”

However, in the absence of effective opposition from Keir Starmer and the trade union bureaucracy, health workers have shown they are capable of organising for better pay and safer working conditions. They have been the backbone of the NHS response to the pandemic, often working overtime in appalling conditions without adequate PPE to save people’s lives. Labour members should take their lead and join the Essex march for NHS pay justice at Basildon Hospital on August 8th at 11 am.