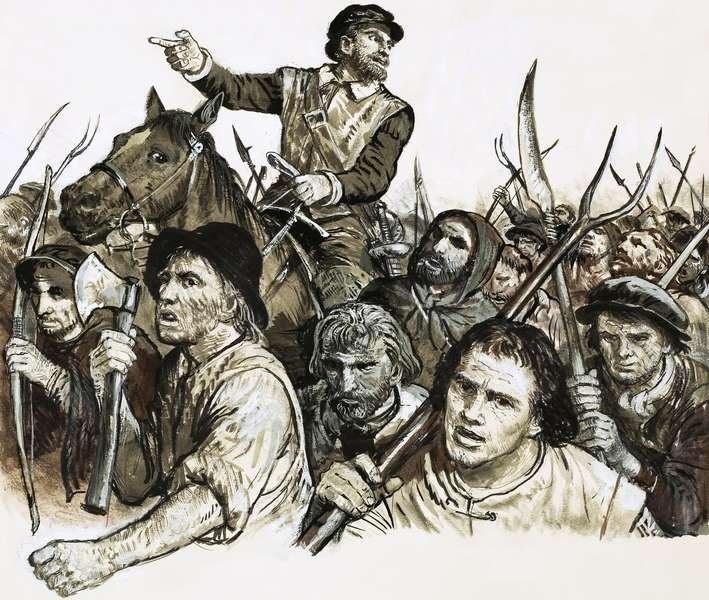 The Peasants Revolt of 1381-82 was the very first time a large section of English people fought for the idea that ‘all men are equal.’ Trevor Osborne acknowledges the huge debt we owe to them.

You would be hard pushed to find a Thurrock resident who hasn’t heard, if not visited, Wat Tyler Country Park. A fantastic space to get lost on a warm spring day, the park itself is spread over 125 acres on the site of the former Pitsea Explosives factory. The land came under the control of Basildon council in 1969 and was opened to the public as ‘Wat Tyler Country Park’ in the early 1980s.

But who was Wat Tyler and why does his name adorn a park in the south Essex marshland?

Most Historians agree Wat was born in Kent in or around 1341. His original surname is unknown; it is believed his first name was probably Walter and that he was a roof tiler by profession from which he took the surname ‘Tyler’.

In May 1381 a Peasants’ Revolt began with the uprising triggered by a recently imposed “poll tax of 4 pence from every adult, whether peasant or wealthy.” Momentum quickly built with increased liberty, social reforms and a law permitting “each labourer be allowed to work for the employer of his choice” being added to the list of peasant demands.

Many peasants and labourers were inspired by the teachings of John Ball, a radical priest who preached that all humans should be treated equally. Numbers swelled and when groups of rebels from across the country began a coordinated assault on London, Wat Tyler had emerged as a leader of the Kentish forces.

On June 14th 1381, the rebels met with King Richard II (then 14 years old) in Smithfield east of London. The young King made several promises and concessions which satisfied some of the rebels who, tired and wary from the journey from all over the land, dispersed homewards despite a feeling of unease that the promises would soon be broken.

At first, the meeting is said to to have gone well, with Tyler treating the king in a friendly manner, and the King agreeing the rebels “should have all that he could fairly grant”.

However, tensions quickly rose. According to a contemporary chronicler, Tyler called for a flagon of water to rinse his mouth “because of the great heat that he was in” and when he received the water “he rinsed his mouth in a very rude and disgusting fashion before the King’s face”.

A servant of the King by the name of Sir John Newton then insulted Tyler by calling him “the greatest thief and robber in all Kent”. A fight broke out when Tyler attacked Newton and he was restrained and arrested by the Lord Mayor of London, William Walworth.

Tyler then attempted to stab the Mayor who was saved by his armour. Walworth slashed Tyler across the neck and head with his sword and another of the King’s servants stabbed Tyler again, severely wounding him. Tyler managed to ride thirty yards before he fell from his horse.

In the disorder that followed, he was taken to a hospital for the poor, but was tracked down by the Mayor, brought back to Smithfield and publicly decapitated. Tyler’s head was placed atop a pole and carried through the city, then displayed on London Bridge.

In the wake of their leader’s death, his followers were driven from London and the movement was shattered. Richard II revoked all the concessions he had made to the rebels and a large number were hunted down and executed as a warning to anyone else thinking of rising again.

As for how a marshland in Essex came to bare the name Wat Tyler?

Fobbing was one of the main villages involved with the Peasants’ Revolt.

The story says that on the 30th May 1381, the commissioner John Bampton summoned the Fobbing villagers, as well as villagers from Corringham and Stanford to Brentwood to answer as to why they had not paid tax. The villagers told Bampton that they would give him nothing. Bampton then moved to arrest the villagers. A riot ensued in which the villagers attempted to kill Bampton but he managed to escape to London.

Sir Robert Belknap was sent from London to investigate the incident and to punish the offenders. On June 2nd, he was also attacked and by this time the violent discontent had spread with the counties of Essex and Kent in full revolt.

In 1981, to commemorate the 600th anniversary of the Peasants revol, a metal sculpture by B R Coode-Adams was erected as a memorial at Fobbing. And at the same time, the Country Park got its name.