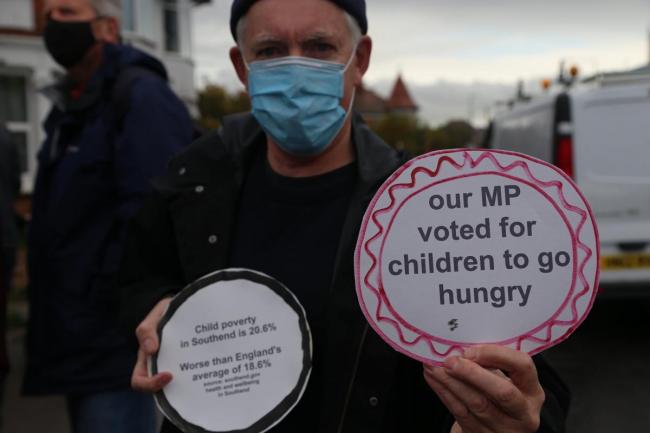 Tory MPs Jackie Doyle-Price and Stephen Metcalfe voted against the extension of free school meals to 4,512 Thurrock children during the holidays. Britain is a wealthy country, but a third of its children live in poverty. Dara O Cogaidhin argues that child poverty is not inevitable; it is a political choice.

Antonio Gramsci, the brilliant Marxist intellectual, raised the old question of the working-class “throwing up its own leadership” in times of struggle. It is a fact that in every section of the working- class, there springs up first-class militants with great organising power and ability to advance the consciousness of workers. Given the unpredictable and tumultuous events of the past year, should we really be surprised that leader is a footballer with Manchester United?

Marcus Rashford has emerged as one of the heroes of the crisis, not just because he has highlighted the issue of child poverty, but because he has had the political acumen to shame the government into taking action. Although Rashford now earns millions of pounds each year, he has spoken movingly about his own experiences growing up in poverty relying on state-funded breakfasts and free school meals. He grew up in a single-parent family in Manchester: an area where a third of all children now live in poverty.

With the start of the six-week summer school holidays, the Tories announced that its current food voucher scheme would end. Rashford responded with an open letter to MPs call for the vouchers to be paid during the summer holiday, launching a campaign and mobilising his enormous social media following to force the government to bow to popular sentiment and perform an abrupt U-turn.

Rashford reprised his summer campaign to give free school meals to children living in poverty during the October half-term and Christmas, but the Tory government voted down a Labour Party sponsored motion that read: “This house call on the government to continue directly funding provision of free school meals over the school holidays until Easter 2021 to prevent over a million children going hungry during this crisis.”

Both Thurrock MPs, Jackie Doyle-Price and Stephen Metcalfe, voted against the extension of free school meals, despite 4,512 Thurrock children reliant on free school meals in term time. According to new analysis from the End Child Poverty coalition, the number of children in low-income families in Thurrock rose from 11.135 in 2014-15 to 11,896 last year. This means 29.9% of all those aged 16 and under are living in poverty in Thurrock.

Low wages, soaring rents and the high cost of living has pulled 4.2 million children into poverty: 600,000 more than in 2011-12 when the Tories implemented a brutal austerity programme targeted at those who least afford it. According to the Institute for Fiscal Studies, child poverty rates are projected to rise to 5.2 million (a rate of 37%) by 2022, roughly in line with the graph below. These poverty rates are tied to inequality in wealth and living standards, which has increased over the past 20 years.

The callous class hatred of the Tories who voted against free school meals was starkly exposed when Ben Bradley MP asserted that the food vouchers handed to hungry children were being exchanged for illegal drugs down the back alley. Selaine Saxby MP, in a tweet she wisely later deleted, offered up the hope that none of the companies offering children free food during the lockdown would be asking for any business bailouts.

A nasty, vindictive Tory government demonstrated their contempt for those less fortunate by choosing to let over a million children go hungry. Their refusal to act is unconscionable, but entirely consistent with the ideas of the New Right. One of its main proponents, David Marsland, argued that welfare “hand-outs” create incentives for families to abdicate from social reliance and social responsibility. A central plank of Tory policy since Thatcher’s premiership was the claim that the welfare state was leading to a culture of dependency.

This was echoed by Ben Bradley MP, in another jaw dropping tweet, when he directly chided Marcus Rashford, stating: “Extending FSM to school holidays passes responsibility for feeding kids away from parents, to the State. It increases dependency”. In response to growing criticism, Tory MPs adopted the line that families need to take responsibility for their kids. However, the number of children growing up in poverty in working households has risen by 800,000 since 2010 – an increase of 38%. Millions of parents are struggling to feed their children because of weak wage growth and cuts to in-work benefits.

The spectacle of watching Conservative MPs contort themselves to justify starving children was too much for Labour deputy leader Angela Rayner. In response to an arrogant display bereft of human empathy from the Tory backbenchers during a debate in the Commons, she broke parliamentary protocol by laudably calling Tory MP Chris Clarkson “scum”.

Rayner later expressed contrition for the remark, no doubt ‘encouraged’ by Keir Starmer who believes calling out Tory barbarism at its most disgusting is somehow damaging civility in political discourse. It is grotesque that Tory MPs are shifting the narrative by pleading they are the victims of abuse; not the children they deprive of food.

Small traders and restaurants have shown compassion by offering free meals to children in their locality. This is the least one expects in a civilised society. However, we should not inadvertently normalise child food poverty with the idea of ‘Big Society’ style charity when the government abdicates its duty to feed and nourish children.

Barely any food banks existed before the Tory victory in 2010. The number of uses of Trussel Trust food banks has increased from 40,898 in 2009/10 to 1.9 million in 2019/20 (see chart below). As the Tory government have turned their back on rising poverty, destitution, and homelessness in a neo-liberal roll-back of the state, we have reached a desperate situation where food banks and their collections have become so normalised that they no longer raise an eyebrow.

Rising poverty is a choice, not an inevitability. The last Labour government, to their credit, reduced child poverty by 900,000 and stated their ambition in 1999 that 2020 was supposed to be the year that the UK ended child poverty forever. In the intervening period, targets included in the Child Poverty Act have been rescinded and the Tories abolished the Act in 2016. Labour undermined their previous commitment to ending child poverty in 2015 when 184 Labour MPs – including Keir Starmer, Angela Rayner and Andy Burnham – abstained and allowed the passage of the Welfare Reform Bill that slashed a further £12 billion in welfare spending.

Rashford has mobilised significant public opinion against this Scrooge-like government, emboldening a typically risk-averse Labour leadership to force another Commons vote on free school meals. Boris Johnson is under growing pressure to rethink its contumacious stance, as Bernard Jenkin, the Tory chair of the Commons liaison committee, conceded the government had “misunderstood the mood of the country”. Images of anti-poverty campaigners placing empty plates outside the offices of Tory MP David Amess in Southend went viral over the weekend.

Thurrock Labour rightly admonished Thurrock’s Tory MPs for “turning a blind eye to thousands of local families facing a bleak winter of real hardship”, calling on Thurrock Council to fund the provision of free school meals during the holidays. But nationally we need to ramp up the pressure and coordinate efforts to force another Tory retreat. Labour should demand that free school meal provision should be extended to include households in need with incomes about the £7,400 threshold.

Any decent society – particularly one as wealthy as modern Britain – should consider feeding its citizens a moral imperative. Not so under capitalism. Marcus Rashford has identified the deeper structural inequalities that created child poverty in the first place: “The system is not built for families like mine to succeed, regardless of how hard my mum worked”. We need an end to austerity, an end to welfare conditionality and an end to low pay. Only a bold socialist programme can deliver a real end to child poverty.