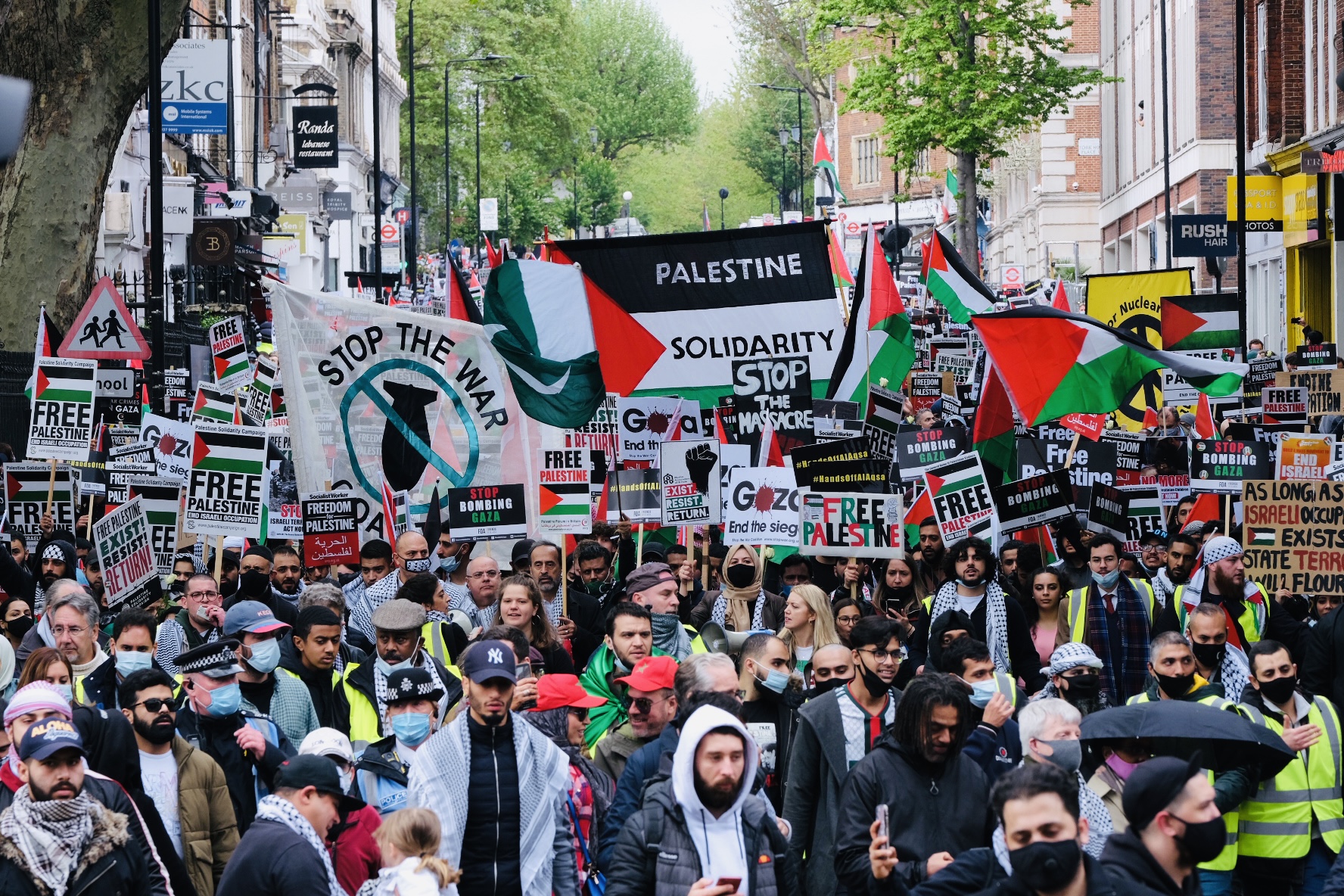 Israel’s wanton, murderous bombing campaign in Gaza is being countered by a resurgent Palestine solidarity movement. Dara O Cogaidhin joined the protest in London to mark Nakba Day and reflects on the need for meaningful solidarity.

At least 100,000 people, mobilised with little notice, descended on central London on Saturday to mark the anniversary of Nakba; a date when 800,000 Palestinians were ethnically cleansed as part of the foundation of the state of Israel. It was one of 77 demonstrations taking place across Britain. The protestors denounced the Israeli army’s recent bombardment of Gaza and the imminent eviction of a number of families from Sheikh Jarrah in East Jerusalem.

Starting at Marble Arch, the march swept through the streets of London towards the Israeli embassy. The demonstration was predominantly young and militant. Chants of “Free Free Palestine” and “Israel is a terror state” filled the streets. After 5 years of Israel’s supporters smearing Palestinian solidarity as antisemitic, the movement was back on the streets with renewed confidence.

There were early signs the mobilisation would be sizeable on the train to London. At Grays station, three young people with flags and placards boarded my train carriage. One of them was Palestinian; his family were from Haifa, but he was born and raised in a refugee camp in Syria. He came to Britain five years ago because of the civil war. The gut-wrenching sight of dead civilians and residential buildings falling in Gaza motivated them to attend to demonstration.

Israel has been in illegal occupation of the Palestinian West Bank, Gaza Strip and East Jerusalem since 1967. During this time, they have entrenched an Apartheid system of institutionalised discrimination and oppression. This includes a system of checkpoints, walls and surveillance that controls Palestinians’ daily lives, demolition of houses, expansion of illegal settlements, and imprisonment, abuse and torture of large numbers of Palestinians, including children. Within Israel itself, Palestinian citizens face systemic and institutionalised discrimination.

The latest episode of the conflict started in the East Jerusalem district of Sheikh Jarrah. For weeks residents have been resisting attempts by police to evict Palestinians from their homes in favour of Israeli settlers. Worshippers at the al-Aqsa mosque in Jerusalem – the third holiest site in Islam – were also attacked by Israeli riot police on the Muslim festival of Eid (May 8th). Three hundred were injured by rubber bullets and stun grenades while the mosque was doused in tear gas.

Hamas replied with improvised rockets, providing Israel with the pretext to launch its barbaric assault on Gaza. On the day of writing (May 16th), 42 more people have killed in Gaza, bringing the total number of dead to more than 170. On the same day as the protest, the Israeli army demolished a residential building housing Al Jazeera and Associated Press. This war crime is an assault on the free press and an affront to the principles of free speech.

Despite this, the mass media continue to portray fighting between Israelis and Palestinians as a round of meaningless violence from “both sides” of an equally matched contest. Blaming Hamas for the escalation ignores the series of criminal Israeli provocations in East Jerusalem and the bombing of Gaza have been far more vicious than the rockets they are “retaliating” against. You would never know that Palestinians are protesting Israeli far-right pogroms and an illegal occupation.

Sporadic rocket attacks on Israel by Palestinian resistance organisations are a desperate response to the sustained, systemic and brutal repression by Israel that has been going on for decades. Palestinians have been relentlessly disposed and brutalised with seemingly no recourse. Socialists clearly distinguish between the violence of the oppressor and the oppressed. We stand in total solidarity with the Palestinian resistance.

The present military assault has proceeded with the green light from Israel’s allies in Washington and London. Biden and Johnson’s calls for restraint on all sides has been echoed by Labour’s foreign policy spokesperson Lisa Nandy who drew a false equivalence when she stated that “both sides must urgently seek de-escalation”. Last year Nandy gave Stephen Kinnock a public dressing down for a speech he made criticising Israel, calling for a ban on products made in Israeli settlements which he correctly said was “tantamount to profiting from the proceeds of crime.” As a right-wing MP, Kinnock got off lightly. Keir Starmer sacked left-wing MP Rebecca Long-Bailey from his shadow cabinet after she shared an article with a passing criticism of Israel.

Historically the Labour Party has been a structural inhibitor on popular movements and radical politics. Keir Starmer recently pulled out of an Itfar event during Ramadan because one of the organisers had advocated the boycott of Israeli dates grown on occupied land. But the vilification of pro-Palestinian opinion and the weaponisation of charges of antisemitism in the Labour Party (including suspending former leader Jeremy Corbyn) have not broken the mass base of Palestinian solidarity and opposition to war.

What can be done?

Labour members cannot be silent witnesses to the horrors being visited upon Palestinians. It’s time take a stand to end Israeli apartheid and occupation. More than 275,000 people have in recent days signed a petition at the UK Parliament website calling for sanctions against Israel. Labour must call for an immediate cessation of Britain’s “enhanced military collaboration” with Israel, including the export of arms. The refusal of Italian dockers, organised in L’Unione Sindicale di Base, to refuse to load a ship containing arms to Israel is an example to the labour movement internationally.

Polling carried out by YouGov in March found that 61 percent of Labour members supported the boycott, divestment and sanctions (BDS) movement against Israel, while only eight percent opposed it. Starmer’s erroneous view that BDS is “antisemitic” puts him at odds with the Labour membership. The BDS movement took its inspiration from the successful South African anti-apartheid movement and has succeeded in creating a global outpouring of support for Palestinian rights. The decision of the Basildon and Thurrock Trades Council to affiliate to the Palestine Solidarity Campaign (PSC) should also be followed by local CLPs.

The only possible democratic solution to the horrors inflicted on Palestinians is the dismantling of the Apartheid state, the right of return for all Palestinians and the establishment of a bi-national state based on full equality for all – Muslims, Jews and Christians. A further protest is being organised for Saturday May 22nd at 12pm at Marble Arch. End the blockade of Gaza! End the Occupation! Solidarity with the Palestinian resistance!